The Cat and the Grasshopper

The Cat and the Grasshopper

The post title sounds like one of Aesop's fables, doesn't it?  But, those are fiction...this is a true story...kekeke! ^_~  It's the story of Cookie and the (unfortunate) Grasshopper. 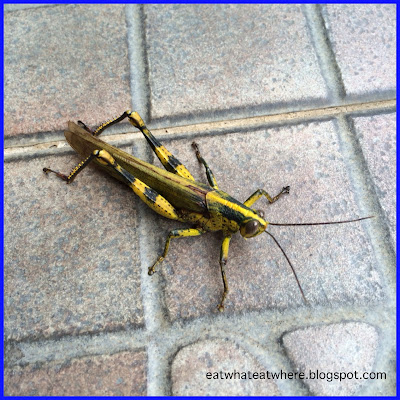 One day, I was greeted by this grotesque looking creature in my porch.  Eww, I hate grasshoppers, so I left the repulsive little fella alone...obviously.....hoping he'd hop away soon. 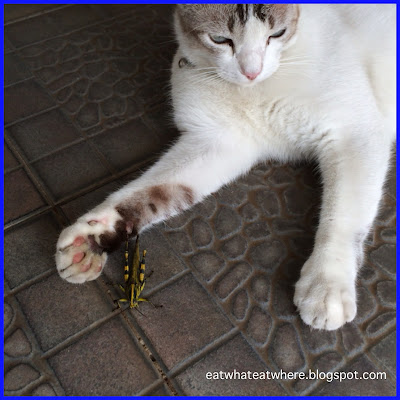 But that was before he had the misfortune of meeting my Cookie! :O 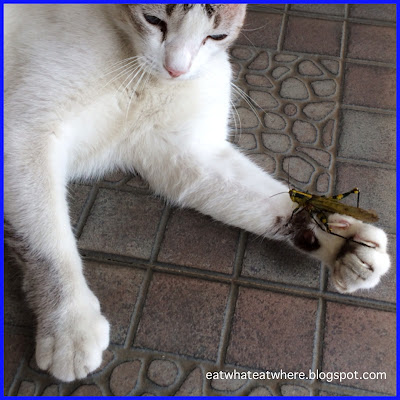 Aww, so cute...the Grasshopper is standing on Cookie's paw....and they look like bosom buddies.  But that couldn't be further from the truth. 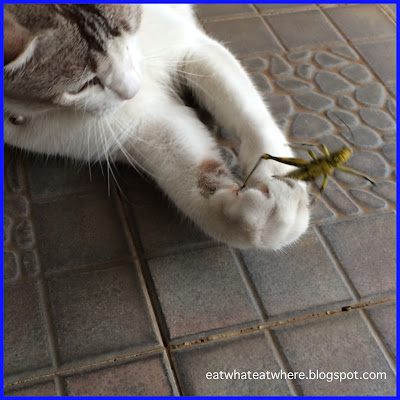 The Grasshopper was in his grasp (as an unwilling party)...and was trying to take flight to escape from his clutches.  But it was too late! >_< 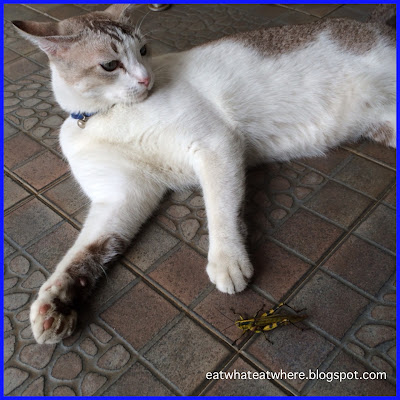 Cookie (who's a natural-born killer with a hunter instinct) had already drove his sharp claws into the poor thing. 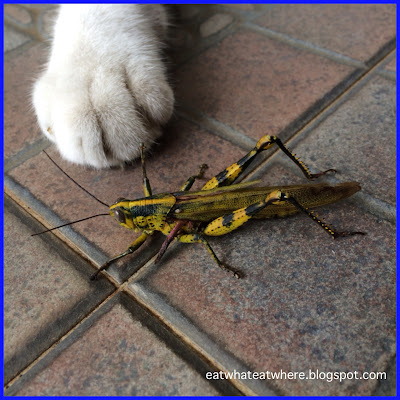 On closer inspection, I realised that my Cookie has disemboweled the poor Grasshopper.  See that thing protruding from his belly! O_o 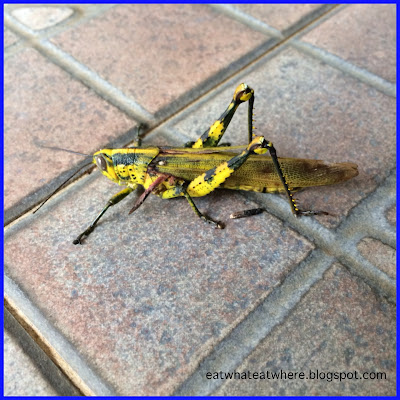 Let me show you a more legible shot...that thing that's jutting out....is that some kind of internal organ? 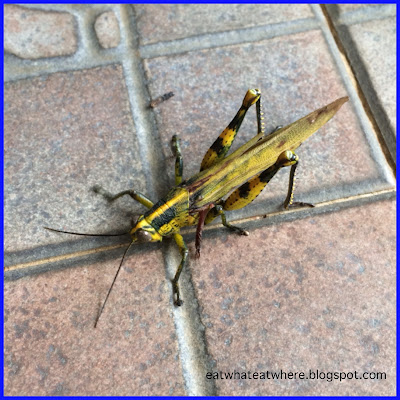 Not only that but one of his legs was dismembered as well.  I guess he's kaput (finished).  The end is imminent.  Not that I will bemoan his loss. 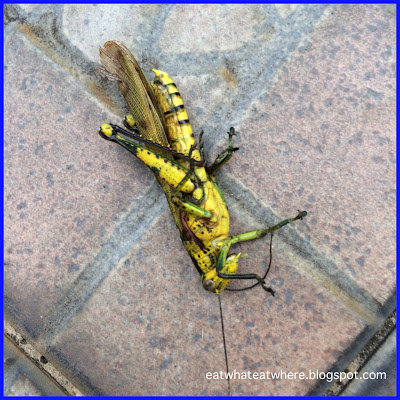 Some time later, he finally crossed over to insect heaven. 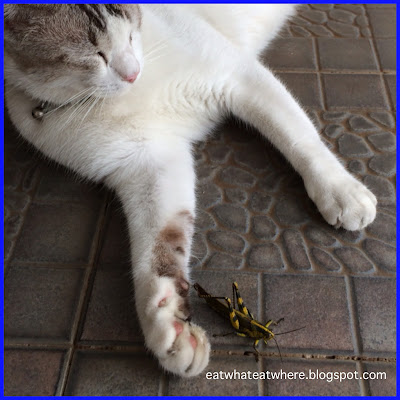 I really hate grasshoppers (especially big ones like these coz they're really hideous looking)....so, only crocodile tears for the poor Grasshopper, sorry! :(

And that brings us to our next story.

The Cat Me and the Wasp 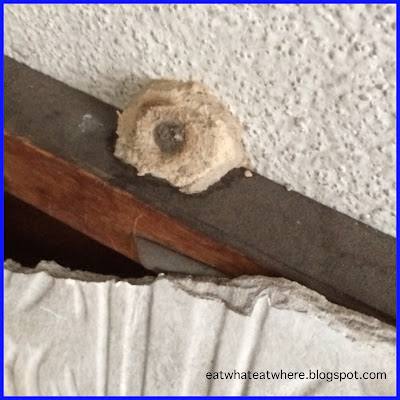 One day, I found what looked like an insect's nest on one of my side walls in the porch.  I took notice of the nest for a few days but it didn't look like this initially....it had a hole in it, like a burrow. 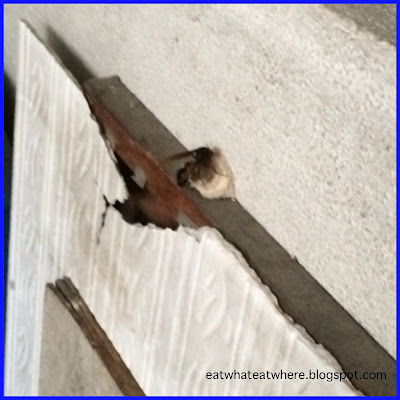 It was only later that I saw who the visitor was...flying in and out to build something to cover the opening of the nest.  OMG, the intruder was huge (it was bigger than an inch)! >_<  Sorry for the blur photo as it was taken from afar.  I was way too intimidated to go near.  I thought it was a hornet initially (I know it wasn't a bee) but based on the elongated body, it was most likely a wasp.  Each time the wasp took flight, I'd run like a headless chicken into my house for fear of getting stung (I still remember being stung by a bee once during my schooldays and it was a very painful encounter, one I did not wish to experience again).

There was a time when Cookie was around the porch when the wasp flew in.  He batted at it once or twice and then backed off.  I guess he realised that it wouldn't be to his benefit to engage with the wasp.  Smart. 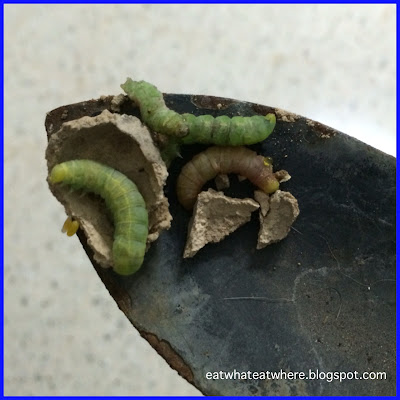 Common sense tells me when an insect is trying to cover up her nest, she obviously has something to hide (+ I needed to get rid of the nest to stop the wasp from coming back).  So I dug into the nest (after the mama wasp has left, of course) to destroy it and discovered four fat-looking grubs (3 greenish ones and a brownish one)....oh no, wasp larvae! O_o  So, I got rid of them by flushing them down the toilet (I know that sounds kinda cruel but they're stinging wasps, you know). 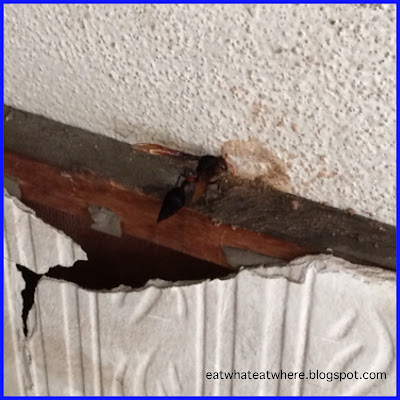 The mama wasp is gonna be really pissed when she returns to find her babies gone (I'm sorry but I had to annihilate her entire family).  I kept a lookout for the wasp each time I ventured out into my porch (so that I can dash for safety when she returns).  And return she did (to the scene of her destroyed nest)...many times.....believe it or not (must be mummy's instincts)! :O 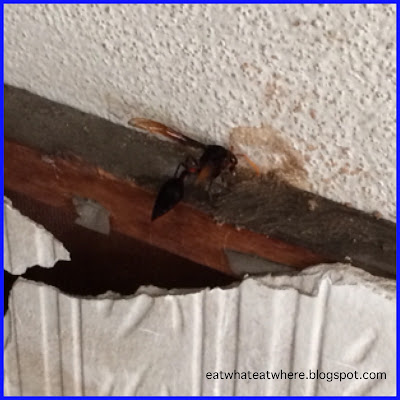 In the end, I had to get rid of all evidence of her 'once there' nest (I scraped all remnants off the wall, scrubbed the spot and sprayed insecticide over it) in the hope the mama wasp will stop coming back.  It took 2 days before she finally stopped coming! :O 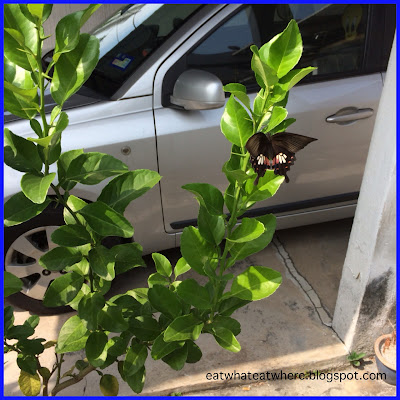 Why can't I have beautiful butterflies come visit me instead of creepy, vile-looking insects (and no, this beauty didn't visit my compound, it visited my neighbour's). 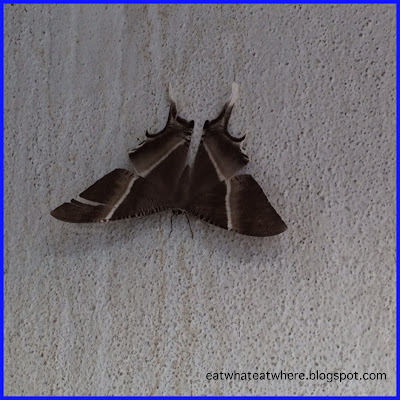 The ones that come visit me look something like this.....haiz (I have no lovely plants for them to graze and relax)! >_<