They say third time is the charm.....well, it was!  After two unsuccessful attempts due to long queues during weekends, I finally got to try Go Noodle House @ Sunway Velocity.  I have been wanting to try for a while now since reading about their highly recommended soup noodles. 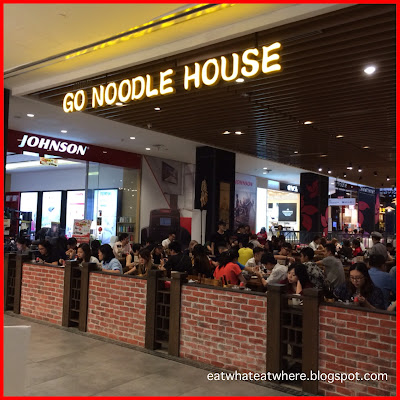 Go during off peak hours when the queue is more manageable but not necessarily less crowded.  We happened to be here for a late lunch and managed to secure one of the last few available tables (I wonder if their other outlets are as busy as this one). 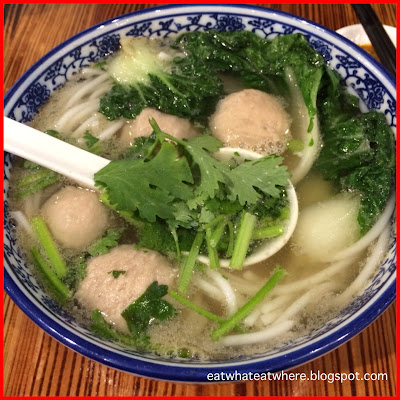 Of course I had to order their must-try Bursting Meat Ball Noodles (in Superior Soup) @ RM10.40 that I've heard so much about with a choice of Superior or Spicy Soup and noodles of mi xian or regular beehoon. 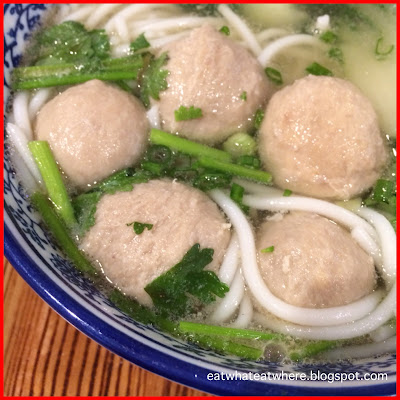 You get a whiff of the Chinese wine-infused broth the moment the bowl lands on your table filled with meat balls and "nai pak" (a variation of baby bok choy except for its noticeably white stems).  The mi xian noodles were cooked just right rendering a soft but not mushy texture and I welcomed the generous amounts of "yin sai" (Chinese parsley) with the soft, sweet and crunchy nai pak. 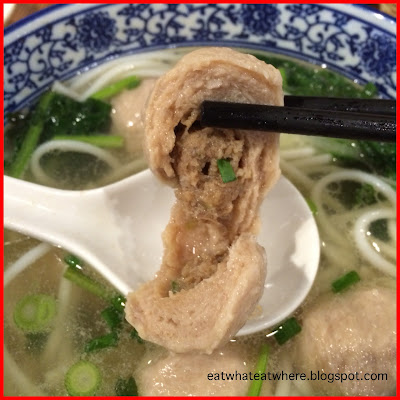 The much raved about bursting meat balls are pork meat balls encased with a savoury pork mince and a broth that squirts out when you bite into it (not a lot, just a little).  The latter two components are probably what makes their bursting meat balls so popular.  And yes, they were 'burstingly' good. ^o^ 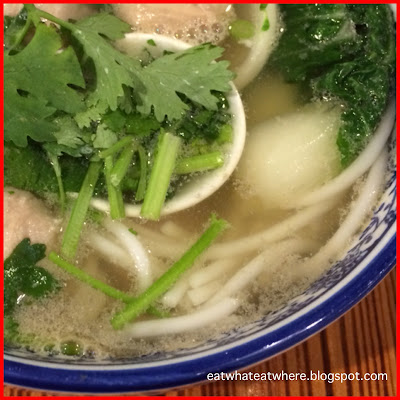 Their fish-based superior soup, on the other hand, is what the Chinese would refer to as "ching" (subtle in taste) and there are bound to be lovers (who like subtle flavours in soup) as well as haters (who would find it too subtle).  I find myself in the former category.  And with close to 20 outlets in Klang Valley alone (and more opening soon) since their first outlet in 2014, it looks like there are more lovers than haters.  But if there's just one thing I can change, it'd be for the wine flavour to be more prominent in the soup. 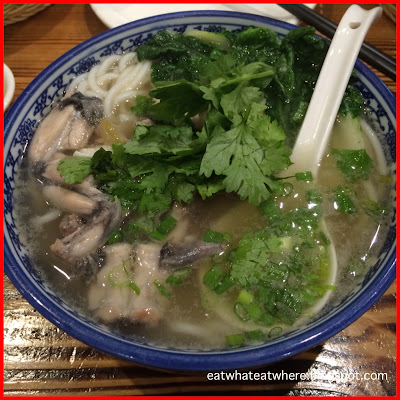 On another visit, I decided to try the Frog Noodles (in Superior Soup) @ RM14.90 with additional Grouper Fish Slice @ RM6. 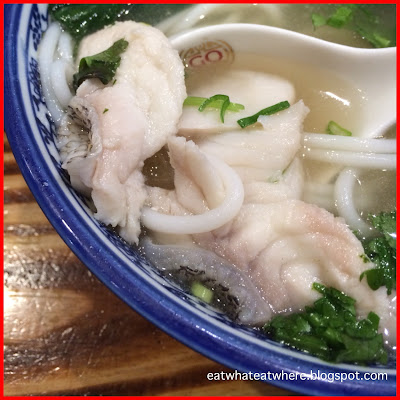 RM6 gets you two not-very-big pieces of grouper fish which were acceptably fresh, not super fresh.  Dunk that into the fresh chilli paste and the freshness wouldn't be an issue. 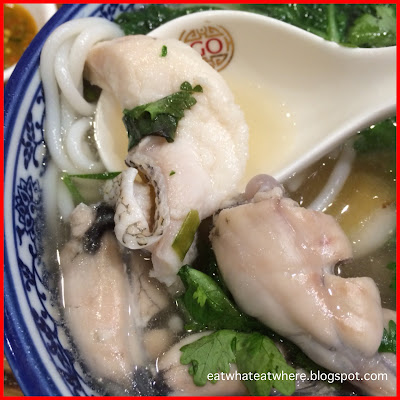 Hmmm, for an extra 50 cents, I can add on both the bursting meat balls and pork or beef balls...I think I'd rather have that instead of the fish slices :) 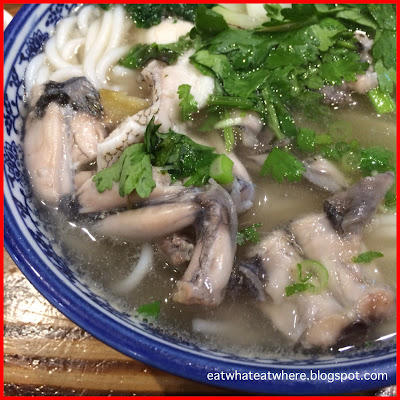 Compared to the grouper fish, I'd say that the frog was fresher although not as fresh or as meaty as some of the ones I've had before (especially those steamed with ginger...yum!) but those were also in another price range altogether. 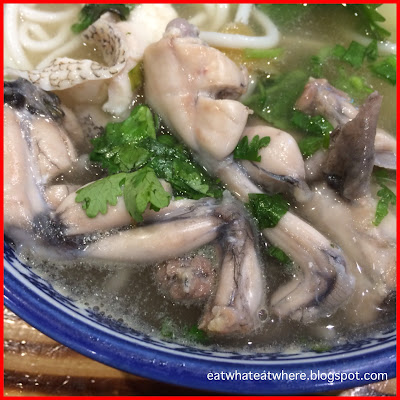 So, I can't complain seeing that I got one whole frog (evidenced by the two frog legs in the soup) for a very reasonable price.  That's the only meat you get as there's very little meat in the bony parts of the frog's body.  It's not easy to find frog on the menu, so if you like frog (like I do), this one is #ewew-approved for its reasonably-priced and satisfyingly-tender meat! ;) 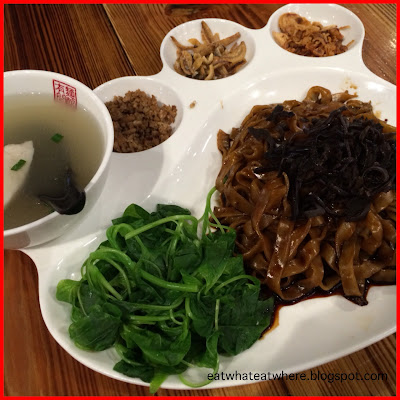 For those who don't eat soup noodles (like my family), I'm afraid there's only one thing left to eat and that's the dry pan mee.  An order of Trio Special Dark Sauce Pan Mee @ RM9.50 comes with a choice of pan mee (thick, thin or tear) and the usual condiments of minced pork, fried ikan bilis, fried shallots, dried black fungus and "yin choy" (Chinese spinach). 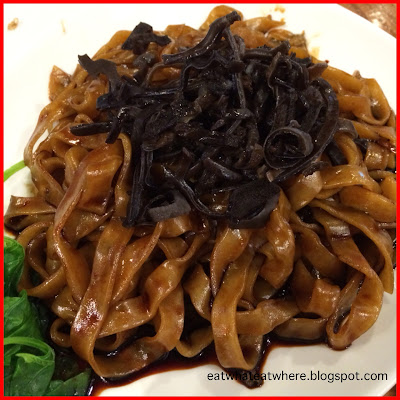 Probably not the most memorable dry pan mee around as the flavour of the dark sauce wasn't all that fantastic but acceptable enough to finish.  I'm not sure why the spinach was served on the plate and not in the soup (I'd prefer it to be in the soup). 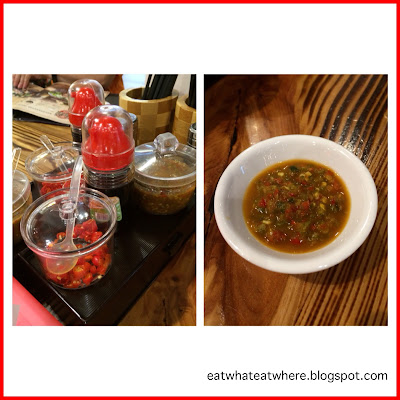 Spice up your noodles with the chilli condiments provided on every table...fiery red bird's eye chillies and a fresh sambal. 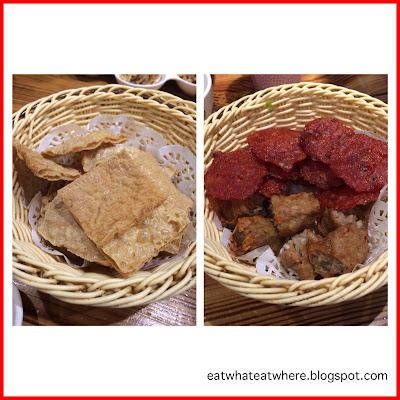 If you want to add on some snacks, a good side dish would be the Trio Platter @ RM15.30 that's made up of three items...gold coin, pork roll and crispy "fu chuk" (bean curd sheet). 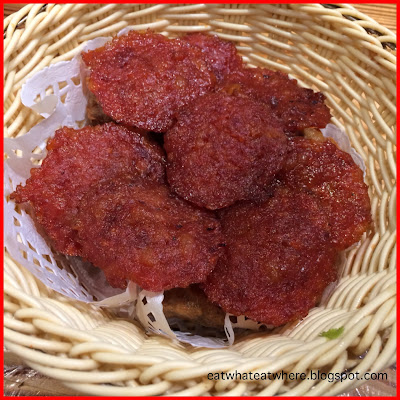 The gold coins tasted very much like "bak kwa" or "long yoke" (dried BBQ meat), slightly sweetish but lacking the barbecued flavour of the traditional bak kwa.  They were, however, irresistibly addictive. 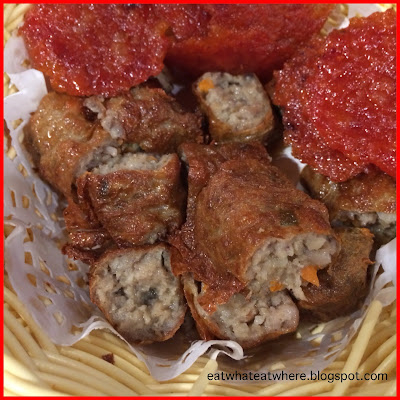 The pork roll was capably executed with a crisp thin beancurd skin and a pleasantly tasty filling of minced pork, carrots, jicama and spring onions. 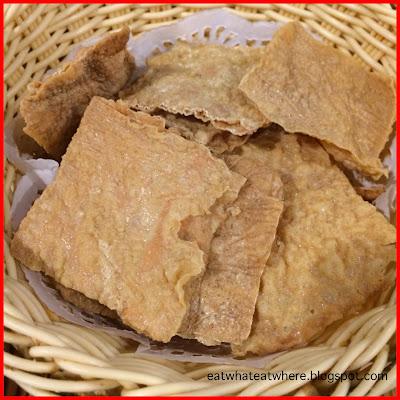 Finally, the fried fu chuk was just that.....a ceaselessly crispy, always-welcome and crowd-pleasing snack for sure.  Fish cake, Taiwan sausage and dragon balls round off their snacks menu. 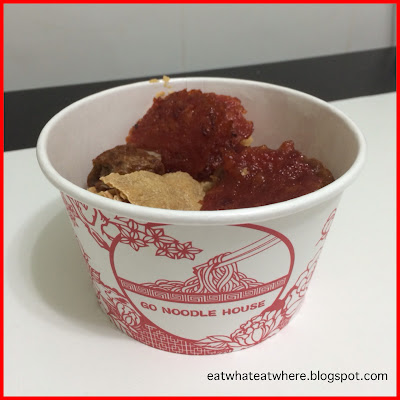 If you've ordered too much and can't finish (yeah, it happens), you get to take it home packed in an environment-friendly paper bowl. 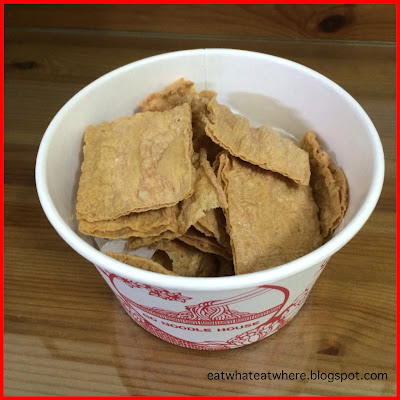 In fact, the fu chuk was so unbelievably crispy that we can safely tell you that it's 'crisp-proof' (hehe!) if you decide to pack some home.  We've done it before and it stayed crispy when we ate it more than 3 hours later (which makes this an excellent snack to pack home if you ask me)! ^.^ 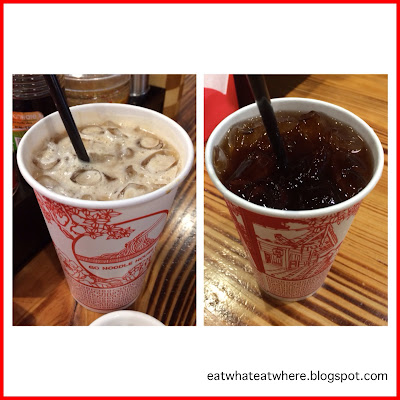 The White Coffee (Cold) @ RM4....not something I'd order again.  I like the soothing In-House Pu Er Tea (Cold) @ RM2.30 which is also good for those who don't like the usual bitter nuances in their Chinese tea (coz this one had an almost sweet note to it).

Besides their best-selling bursting meat ball noodles, there are many other types of noodles that come with fu zhou fish balls, pork balls, fish balls, squid balls, beef balls, fish paste, pork belly, beef slice, clams, prawns, scallops and mussels...the choices are endless.  Not only that but you can also customise your noodles to your heart's content with any of these as add-ons. 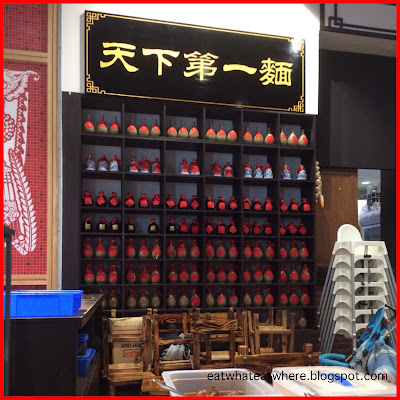 I understand that one can add on more wine flavour to your noodles by purchasing a bottle of wine from them....what, a whole bottle?...and leave it there! @_@  Now who would want to do that...unless we know we'll be eating there regularly.  Then, there's always the trust issue...of leaving the bottle with them. :P That's why there are probably not many takers, otherwise I can just imagine the workers having their hands full...storing and looking for each customer's specifically labelled bottle of wine (since they're known to serve 1,000 bowls a day!).  I'd rather they just charge us for the additional wine if we want extras...now that seems more workable to me.

I did enjoy their subtle soup base immensely (even though some felt it was too subtle in flavour while others think it might have been MSG-ed) but I'd certainly appreciate a tad more wine flavour (and wouldn't mind paying for an extra spoonful ^_~).

The soup noodles is definitely what you should go for here...and don't forget the bursting, broth-squirting meat balls and the trio snack platter while you're at it.