We came looking specifically for this shop, Maluri Noodle House @ Taman Maluri (opened in February 2015), said to offer a hearty and comforting bowl of pork noodle soup, after reading about it in the Star papers recently. 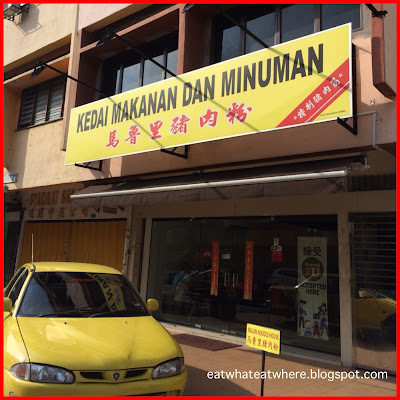 But, if you don't read Chinese, finding the shop may prove more difficult than you think when the shop's signage is written only in Chinese.  We ended up looking for the shop number (56) as we drove past.  Only when we walked up to the restaurant did we find a small standing signage that said "Maluri Noodle House"! >_< 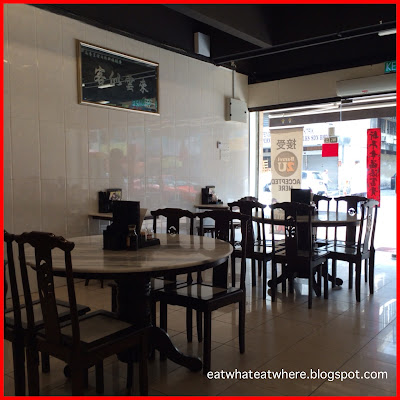 For a noodle shop, the outlook is certainly more comfortable with air-conditioning in a clean and bright environment.  The marble table tops and chairs remind me of another noodle house, Ah Koong in Pudu, that specialises in fish ball noodles. 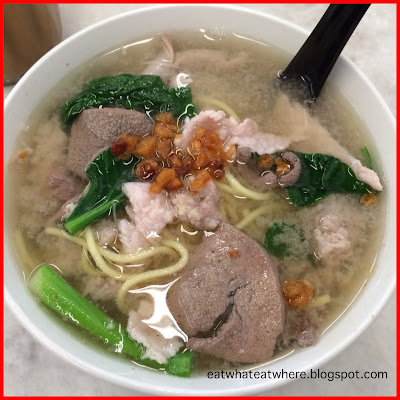 Since their speciality is pork noodles, that became one of our first orders.  I asked for small for my Pork Noodles (soup version) @ RM7.90 (RM8.90 for large) but I can tell you the size was pretty hefty (may be a tad big for a small-eater to finish).  This standard serving of pork noodles came with all the expected porky stuff of lean pork slices, minced pork, liver and intestines.  If there was one complaint, it'll be that the minced meat was a little on the fatty side and not as finely textured or as flavourful as some we've had before. 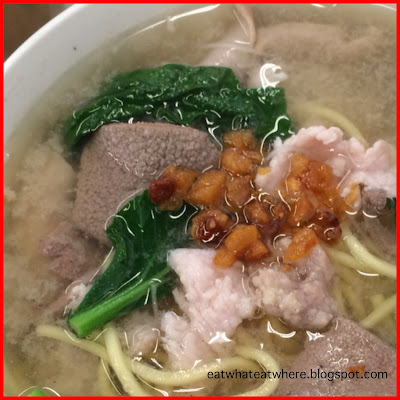 I'd have say the broth (reputedly boiled for six hours using pork bones, chicken bones, anchovies and some herbs) was pretty decent and they were certainly not stingy with the amount of soup they gave either (which came in a big bowl). 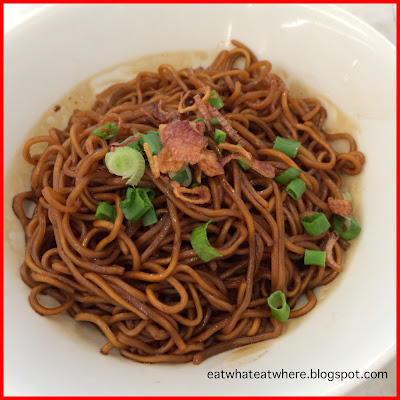 A family member went with the 'Yee Mee' Pork Noodles (dry version) also @ RM7.90 for small. Unfortunately, the sauce base for the noodles wasn't as successful. 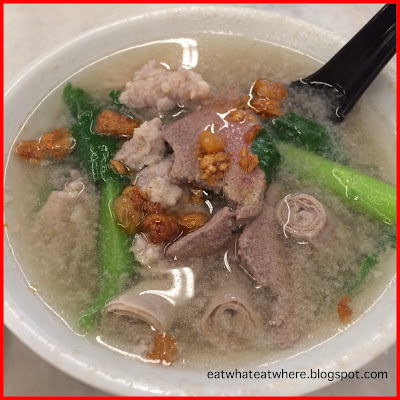 The dry version is, of course, served with a separate bowl of porky goodness.  Though I love (and would always order) the soup version, you can actually get the best taste (out of the soup) from a separate bowl of soup as the noodles will not be there to 'contaminate' the pure taste of the broth. 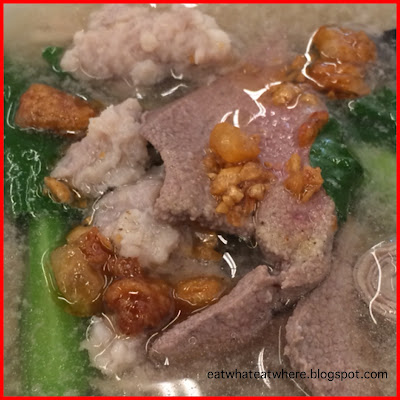 I was, of course, very happy to see my favourite thing floating on top of the noodles...freshly fried pork lard crisps aka "chee yau char"...yay! ^o^  Not only that but the addition of fried garlic also helped to enhance the soup even further....double yay!! 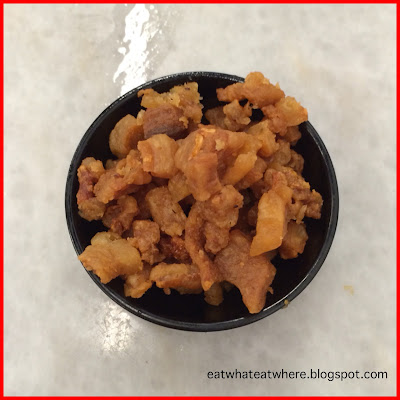 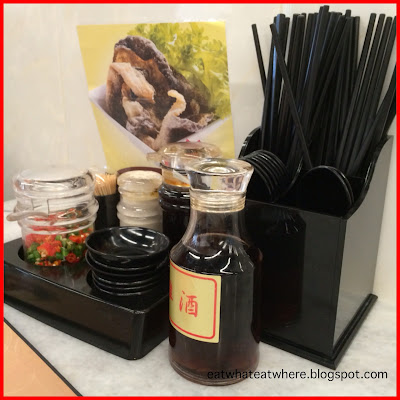 On the table, you'd find the usual condiments of bird's eye chillies, soya sauce, pepper and one not-so-usual condiment, Chinese rice wine, which I didn't know as the condiment bottle was (again) written in Chinese (I thought it was some kind of vinegar).  It's there for you to add a dash of it to the soup to further enhance its flavour.  So, I didn't...and couldn't anyway (even if I had known) coz I was sharing the noodles with my spouse and he doesn't like anything with rice wine in it.  I've never had pork noodles with rice wine, so I don't know how that'll taste but I'm assuming it should be good ;)

If you're feeling super, super hungry (or perhaps two can share), you can go for broke and get their "All In" (RM15) which will get you a standard serving of the usual bowl of pork noodles but with the addition of meat ball, kidney, chitterlings, pork tendon and egg (don't know what chitterlings are...well, they're small intestines..I learned a new word too from their menu...hehe!). 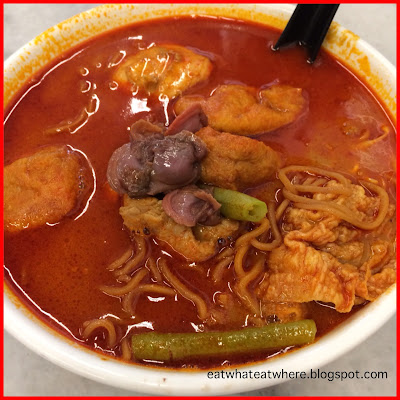 Besides pork noodles, their other signature dish is their Curry Noodles @ RM7.90 laden with curry chicken, fried bean curd sheets, tofu puffs, cockles, long beans and bean sprouts accompanied by homemade belacan. It arrived looking the part...with a layer of fiery red oil (don't worry, it's not that spicy even after I added all the sambal in).  It was an ok curry, in my opinion, but lacking the savouriness and creaminess that I seek (plus I've had better). 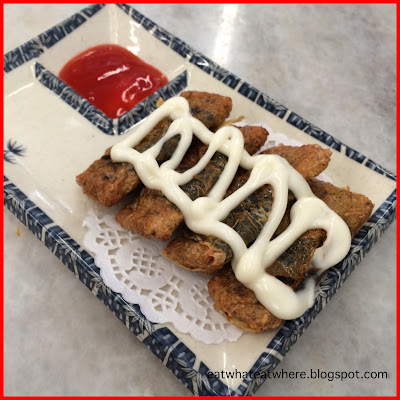 We tried the Deep-Fried Meat Roll (4 pcs) @ RM7.50 wrapped in bean curd sheet and seaweed.  Just wished they didn't squirt so much mayo on top. 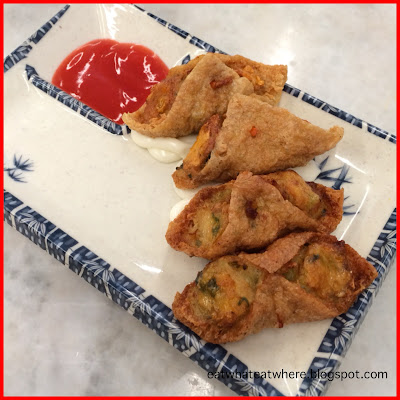 We also had the Deep-Fried Chicken & Pork Dumpling (4 pcs) @ RM7.50.  This time the mayo was on the bottom.  Why can't they just serve the mayo on the side and let us decide how much we want...or not want at all.  That aside, no complaints on both the fried snacks as they were nice and crisp...and addictive to eat.

Another interesting snack they have (a recent introduction since I didn't see it on the menu but on a place card on the table) is the Fried Hong Kong Fish Skin (RM8).  As much as I wanted to try, I didn't have it in the end since my family wasn't keen on it.  Also, I was afraid that it might turn out fishy and that I wouldn't be able to finish it all on my own.  Luckily, I didn't order it coz when I saw it served to another table....it was quite a humongous portion (definitely needs to be shared)! O_o

It was a decent bowl of pork noodles (soup version), not great, but certainly better than the curry noodles. However, it gets extra brownie points for the freshly fried garlic and pork lard crisps.  Then again, I can also get a bowl of good pork noodles from my favourite stall in Pandan Perdana with a 'special' amount of chee yau char just for me! ^_*

I wouldn't mind coming back for the pork noodles but since the dry version (that my family likes) wasn't as successful, I doubt they would want to return + getting a parking spot in this commercial area can be challenging (even on a Sunday).

But, for those looking to eat a big bowl of pork noodles in a comfy environment, this is certainly worth exploring in this part of town.