With Chinese New Year around the corner, my friends and I thought we'd have some Chinese food for a change. After all, it was our pre-Chinese New Year dinner get-together. 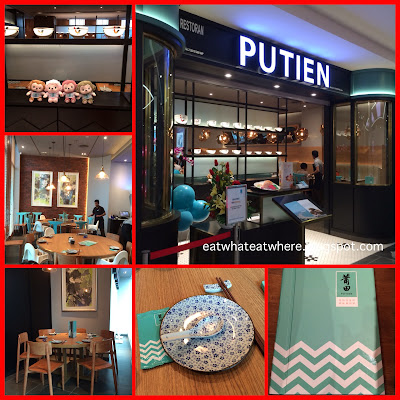 We decided on Putien @ Subang Jaya, their newly opened branch in Courtyard Subang (opened since late December 2015), their third in Malaysia, after its first outlet in 1 Utama in 2012 and its second in Sunway Pyramid the following year, apart from their international outlets in Singapore, Jakarta, Hong Kong, Shanghai and Taipei.

Putien offers authentic Heng Hwa cuisine from the coastal town of Putian in the Fujian province of China and since my friends and I have not tried this type of cuisine before.....we thought why not! 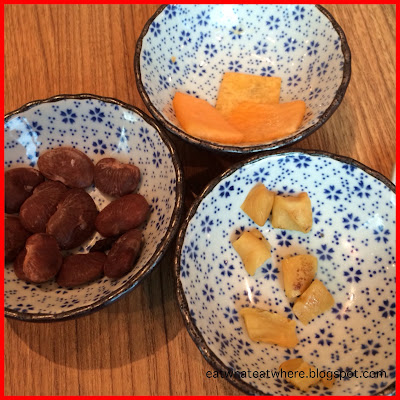 Some small tidbits (foc and almost gone by the time I arrived) are served while you wait.  I've no idea what they were as I didn't have any since we were the last ones to arrive.  I had to get down to ordering straight away. 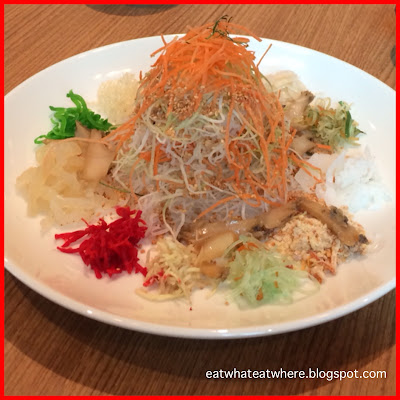 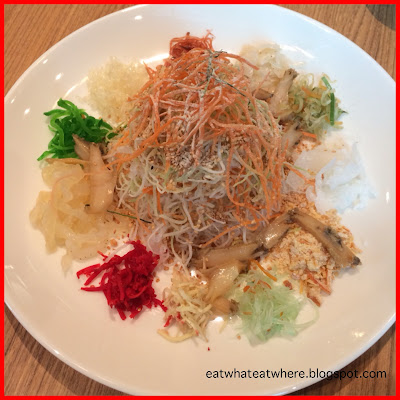 I ordered the Abalone Yee Sang @ RM49.90 (for small).  I wasn't able to snap a photo of the plate of abalone as the gentleman attending to us (he might be the manager of the place) began assembling the yee sang for us before I had the chance to do so (you can see slivers of abalone on the plate already). 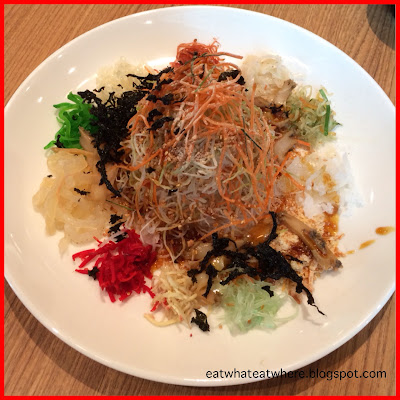 What surprised us was that, as he poured the abalone, sauces, signature seaweed from Putian and the crispy crackers onto the yee sang platter, every round was followed with well wishes of some kind (I may not understand exactly what he said but I know they'd be wishes of good luck, prosperity and health or something along those lines). 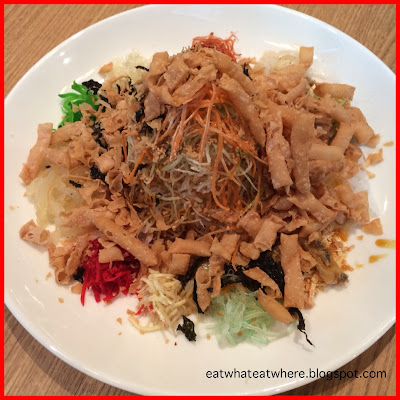 The platter of yee sang is ready for tossing! 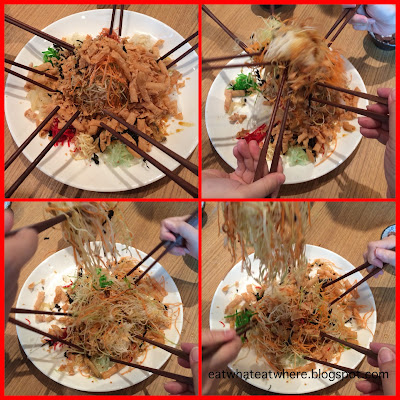 I suppose the higher you toss the better....to help usher in good fortune for the year ahead though I'm not that into the tossing part but more into the eating part! ;D 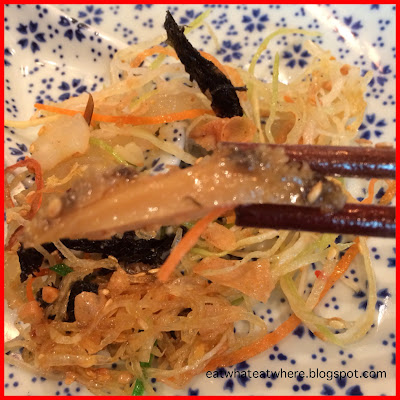 I liked that this yee sang has a very clean, fresh taste without those overly sweet flavours. 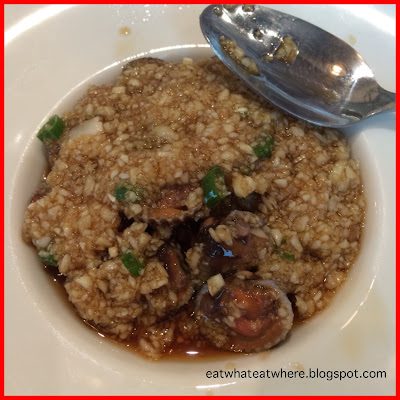 We began our dinner with some appetisers, starting with the Drunken Cockles @ RM13.90 which arrived blanketed in a layer of pungent fresh minced garlic and drenched in wine (I had to scrape some of it away so that you can see the cockles underneath).  Served chilled, it was a fantastic combination of immensely fresh and juicy cockles in a well pronounced wine marinade. 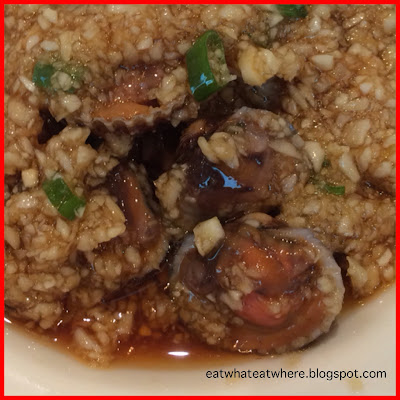 The lightly blanched, medium-sized cockles (wouldn't mind slightly bigger cockles though) were on half shells...pop these into your mouth (and thank me later but only if you're a cockle fan) for a burst of juicy goodness from the very fresh cockles and the wine with none of that unpleasant blood taste of raw cockles.  It was a contender for top dish and I can see why it was voted one of Putien's Top 10 Dishes...coz it was the top dish for two of my friends too.  Two words.....freakin' awesome! ;D 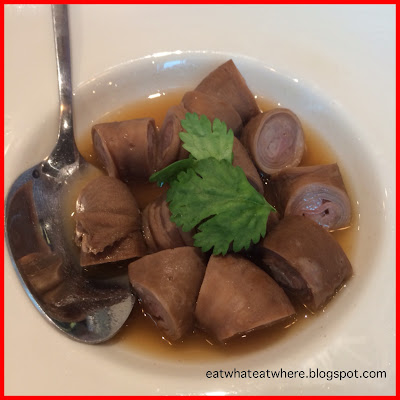 Our next dish was the absolutely tender and well-made Braised Pig Intestines @ RM16.90 which boasts of a '9-fold' 12-inch intestine braised to perfection in their homemade sauce of 12 spices for a springy yet tender bite. 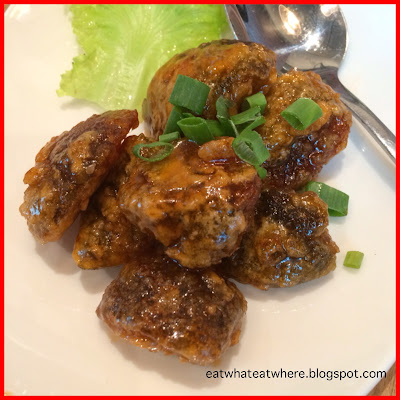 Then came the Putien-Style Century Eggs @ RM9.90 encrusted in a thin batter, fried and tossed in their homemade speciality sauce that tasted slightly sweet and sour.  So, you end up with a bit of a crisp exterior followed by a creamy yolk centre. 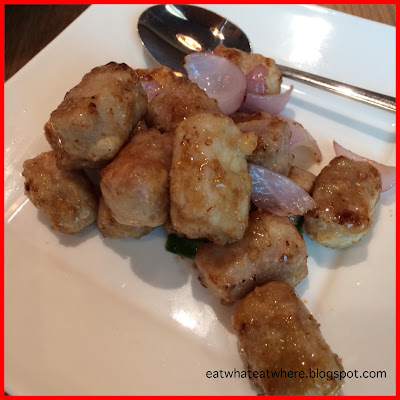 Their Stir-Fried Yam @ RM18.90 (S) had a nice crisp exterior with a warm, soft and naturally sweet mashed yam in the centre.  Expertly stir-fried to create a caramelised texture on the outside, it had sweet and savoury flavours and was outright delicious.  According to the menu, only the finest middle portion of the premium yam is used for this dish. 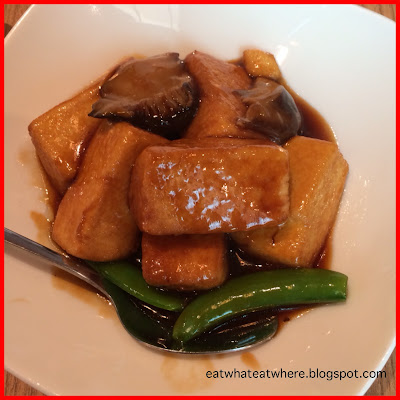 I also went with an order of Homemade Bean Curd @ RM16.90 (S) for the kids.  This silky smooth tofu, made fresh daily, stir-fried with mushrooms and sugar snap peas, in a delectable sauce, was a joy to eat. 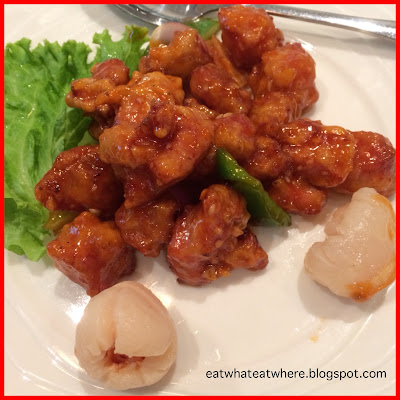 Another thumbs-up dish for the kids was the Putien Sweet & Sour Pork with Lychees @ RM19.90 (S) or more specifically with two lychees...hehe!  No complaints either on this well prepared dish with perfectly fried, tender and moist meat with the right amount of sweetness from the sauce. 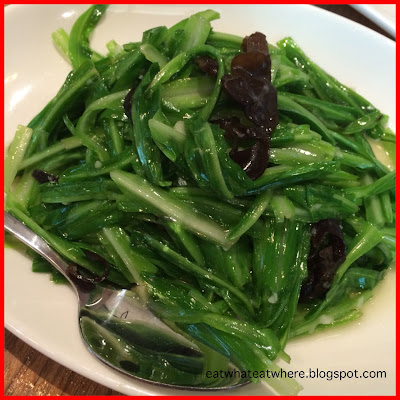 When I saw Stir-Fried Green Dragon Vegetable @ RM19.90 (S) on the menu, I knew I wanted it.  Known as "ching loong choy" and marketed as royale chives, it's a variant of (or closely related to) Chinese chives.  I can't remember if I've had it before and, even if I had, I don't remember it to be as green as this one which was fried with cloud ear fungus ("muk yee") and garlic.  It had a very refreshing taste with a crunchy texture when fried just right (but clearly different and without the pungent taste and smell associated with Chinese chives or "gou choy").  It was rather similar to the stir-fried yellow chives I once had and loved. 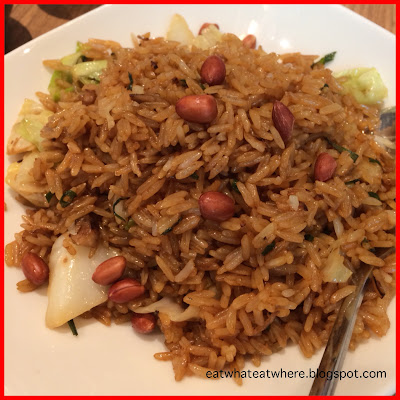 A meal would not be complete without any carbs, so we ordered the Putien Cabbage Rice @ RM18.90 (S) for a no-nonsense home-styled fried rice with bits of pork, cabbage and peanuts...certainly well fried with decent flavours. 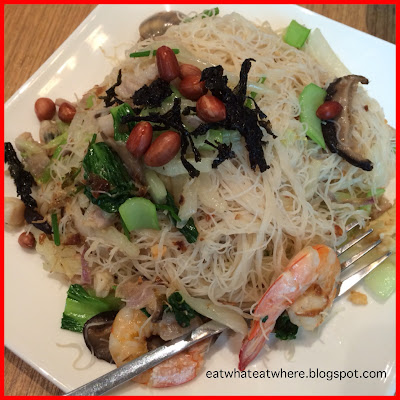 For a further dose of carbs, we had the Fried Heng Hwa Bee Hoon @ RM18.90 (S), a crowd favourite and signature dish of Putien.  Reputed to be sundried vermicelli (not machine dried) and milled by hand in Putian, it had a springy and firm bite.  Our first reaction to the bee hoon was just how fine and translucent the strands were but yet held its shape when fried.  Fried with prawns, clams, bok choy, onions, seaweed and peanuts with stock from pork bones and old hens, it was certainly a dish to savour...and a must-order! :)  [#Tip: For mee sua lovers, be sure to try Putien's mee sua for I heard that it's good too though I didn't get to try as we ordered too many dishes already.  The menu says that it's handmade with premium quality flour.] 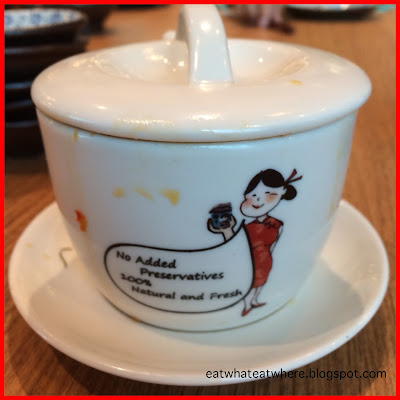 Putien prides itself on serving food that's 100% natural and fresh without any added preservatives.  This container is filled with Putien's Spice Mum Chilli Sauce (that's what the container said) made in-house. 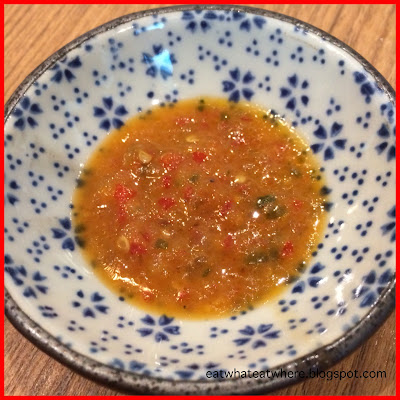 My friends liked their tangy and spicy signature chilli dip though I found it just ok as I detected a hint of bitterness in the sauce (probably from the grated lime skins).  Eat this with the fried bee hoon or everything else if you like...but watch out, it packs quite a punch ;) 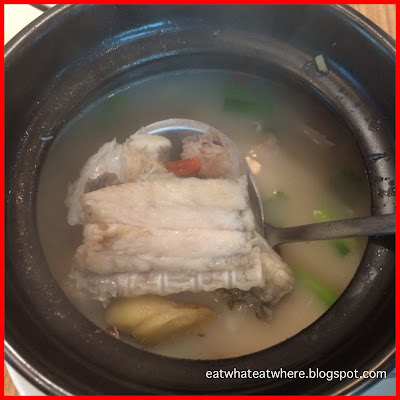 We rounded up our meal with the Claypot Fish Soup @ RM44.90 (S) where the live fish (as it was described in the menu) but I take it that they meant "sang yue" (otherwise known as snakehead or ikan haruan).  The fish is fried first before being simmered for hours in a broth with yam, ginger, spring onions and wolfberries.  It arrived piping hot in a rich, milky looking broth that was divine right till the last drop.  Three words...freakin' awesome again! 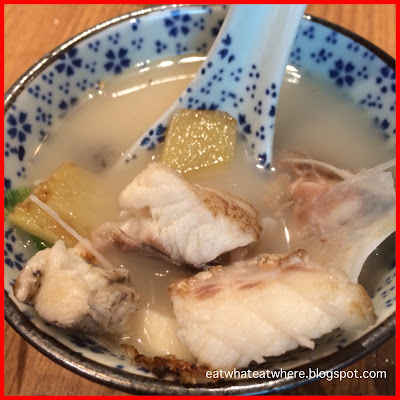 The flesh of the sang yue was incredibly soft and sweet.  The yam and utterly fresh fish brought sweetness to the soup like none I had before.  It was without doubt a nourishing and invigorating bowl of soup...it was really, really good.  No wonder it got two votes from my party-of-five as the best dish of the night.

The final adult in my party couldn't quite decide which was her favourite dish...she liked them all and I can certainly see why...coz everything we had, I've got no complaints whatsoever! :D 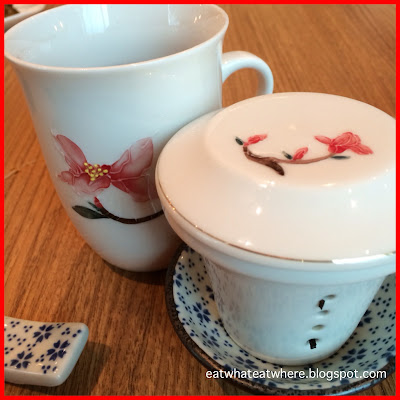 One final thing to note, the tea here is charged based on per cup basis with top-up available.  You have a choice of two teas and both aren't cheap by the way.  It comes in a special contraption that contains the tea leaves which sits on top of the cup. 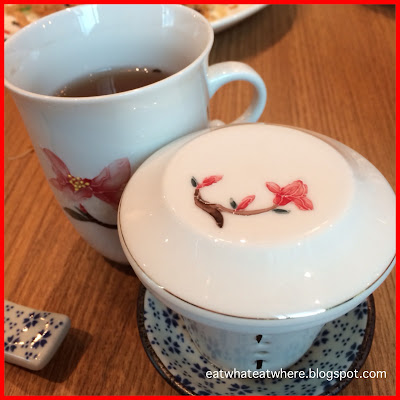 Shui Xian Tea @ RM8.90 per cup, a semi-fermented tea principally produced in Fujian province, is a combination of both green and black tea (all four in my eating party went for this one). 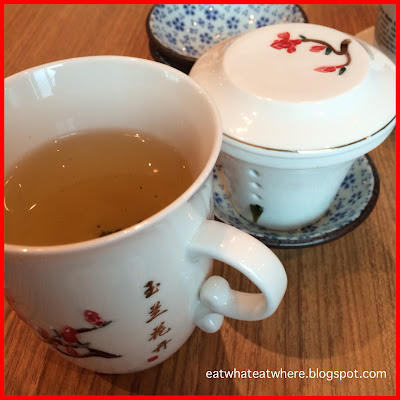 I went for the Premium Tie Guan Yin Tea @ RM9.90 per cup belonging to the Oolong tea group (supposedly the priciest tea according to the description on the menu).  This turned out to be the better tasting tea of the two and elicited my friend to order an extra one for the kids to share. 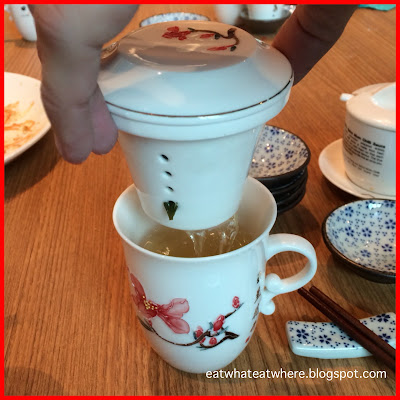 Looking at the price per cup, just the tea alone may cost you RM100 for a table of 10, so you may want to share (and I think it's perfectly fine to do so) since the tea leaves are fixed and that the refill given is just hot water (you have to contend with the tea being more diluted with each refill, of course).

This place is great for smallish eaters as some of their dishes come in small sizes of XS, S & M (and not the usual S, M & L)...and, for heavy-eaters, you can sample more dishes in one sitting though some may feel that the prices do not justify the small serving portions.  For me, I felt that the slightly more premium prices were alright when coupled with quality ingredients and attentive service.

Those who prefer lightly seasoned food and subtle tastes (some might say bland) would do well here as the dishes are not robustly flavoured...they're not too oily, too salty or too sweet but still very good nonetheless.

If I really had to choose, my two top dishes of the night would be the claypot fish soup and drunken cockles followed closely by the stir-fried yam, fried Heng Hwa bee hoon and braised pig intestines.  I don't eat at Chinese restaurants all that much...but this one I clearly loved.  There are still loads on the menu I've not tried.....and I'd definitely return in a heartbeat! ;) 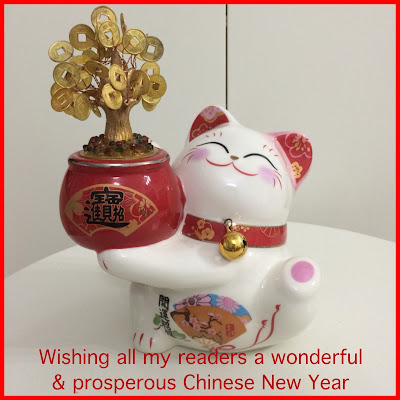 May this new year bring you
prosperity, good luck and good fortune!! 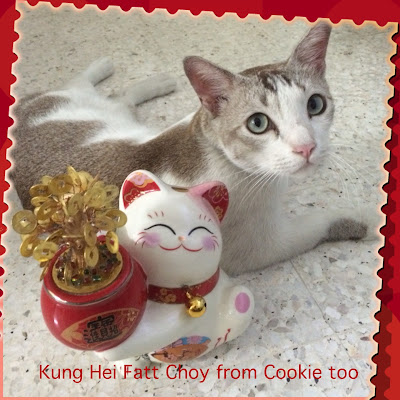 *And I'll be back after a short break*