No trip to Y E Traditional Dumplings @ Pandan Jaya is complete without trying their rice dumplings, a signature item of theirs.  Would you think I would have left without trying one on my first visit here?  Of course not! ;) 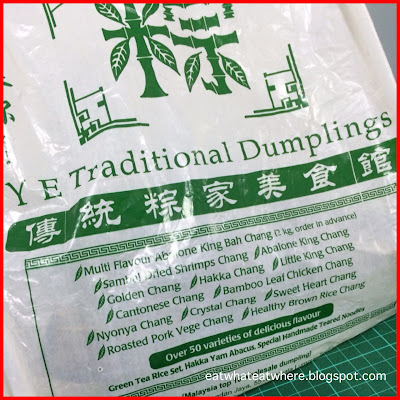 Plus no review of the place is complete without dedicating a post (and a review) on their glutinous rice dumplings.  After all, they're a specialist in rice dumplings from the name itself. 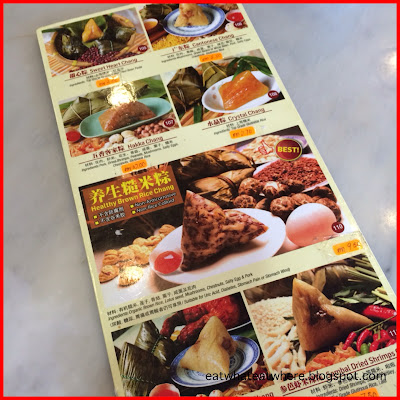 Before that, let me tell you they have many types for your selection...from the cheapest Crystal Chang (you know, those you eat with sugar or kaya, RM5.80) to the most expensive, the gigantic 2kg Multi-Flavour Abalone King Bak Chang (RM410) that can feed 8 persons (of course, advance booking is required for this chang).  I'm not even sure if it's still offered or if there'd be any takers for this chang.  Would there be anyone who'd be willing to pay so much for just a chang? O_o 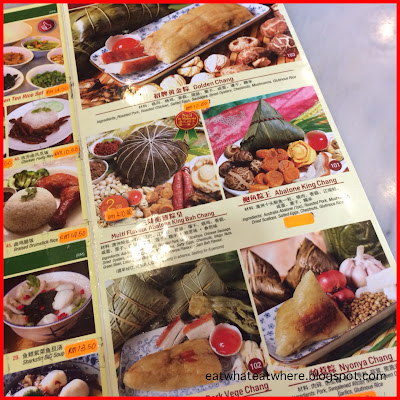 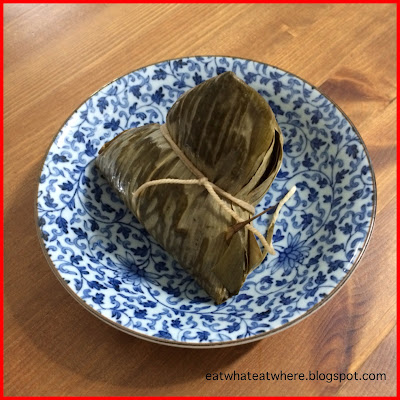 I was too stuffed on my first visit to eat anything else but I wasn't going to leave without having my favourite chang, the Cantonese Chang @ RM8.50 (so I packed one for later).  I was pleased to see it tied with hemp strings, a better alternative to raffia strings for sure. 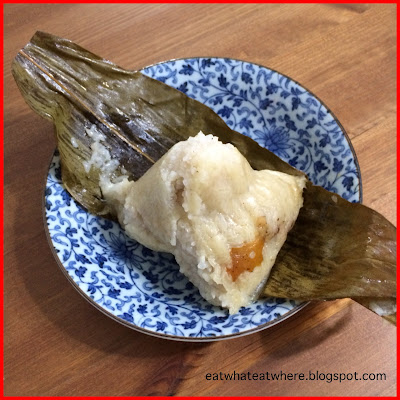 I absolutely loved this Cantonese chang because it doesn't use soy sauce in the rice (besides the rice being not fried) which allows me to taste the glutinous rice grains in its pure form.  On unwrapping the chung, I could see a bit of the rice stuck to the bamboo leaves which I didn't mind at all as that would mean the chung is less oily. 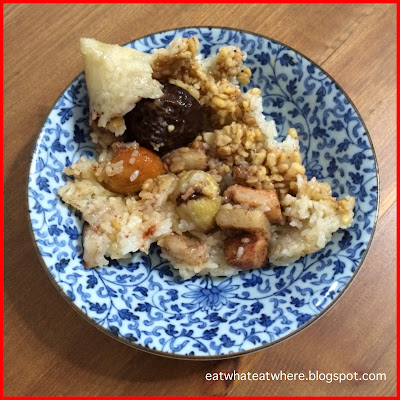 This rice dumpling was filled the usual culprits of fatty pork, mushroom, salted egg yolk, chestnut and green or mung beans.  Even though the mung beans were not mashed, they were cooked till very soft and the tasty fatty pork were evenly cut into uniformed cubes.  If there was one thing they could improve, it'd be for the salted egg yolk to be of a better quality. 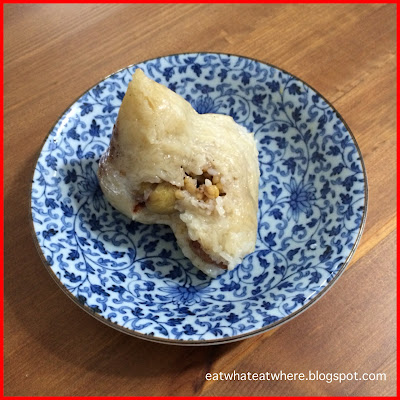 But they got the overall flavour of the dumpling right...and that's the most important criteria of all. This chung was utterly delicious and one I would return again for. ^o^  Now I know where to get a good chung (near me) if I need one...only downside is the price which is higher than the norm. 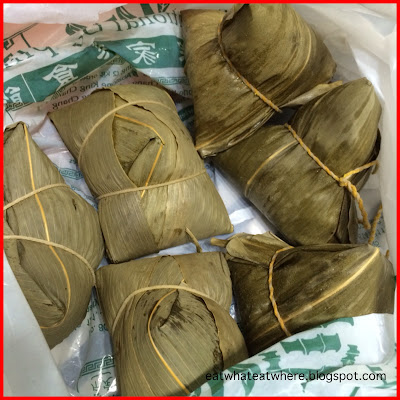 With the first chung ticking all the right boxes, I knew it would be a matter of time before I returned to get my hands on more.  But before I did, my spouse came back one day with more...even better. 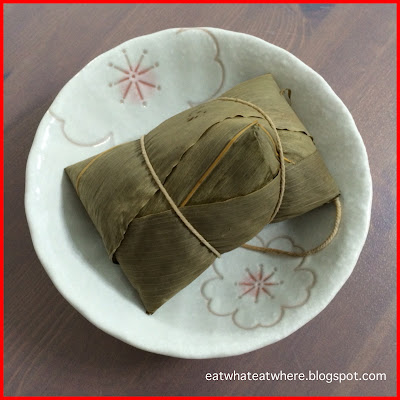 He bought two types this round, a few Hakka Chang and a few Brown Rice Chang.  I had one of each. The Hakka Chang @ RM10 is sufficient as a meal in itself because of its portion size. 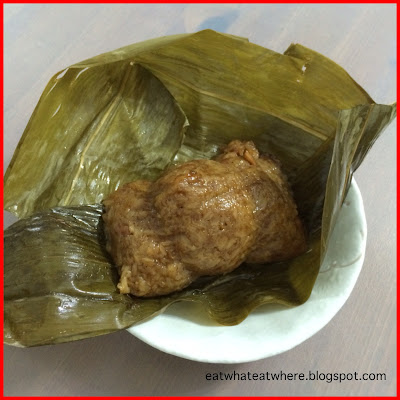 The glutinous rice of the Hakka Chang is brownish in colour as the glutinous is pre-fried with soy (similar to a lor mai kai).  The rice was cooked till wonderfully soft, just like the Cantonese Chang. 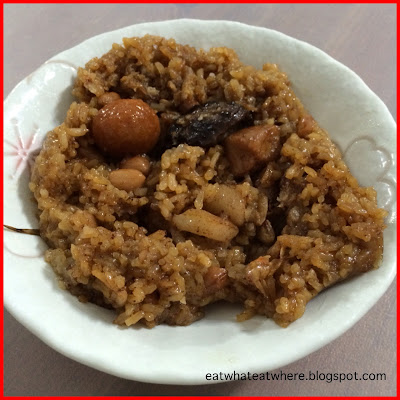 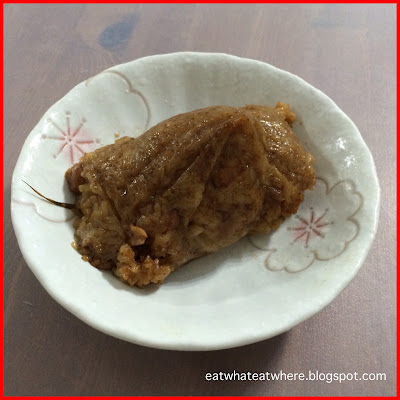 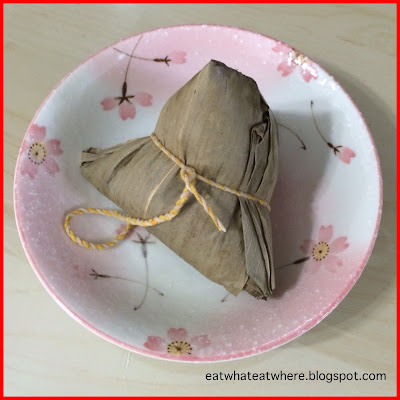 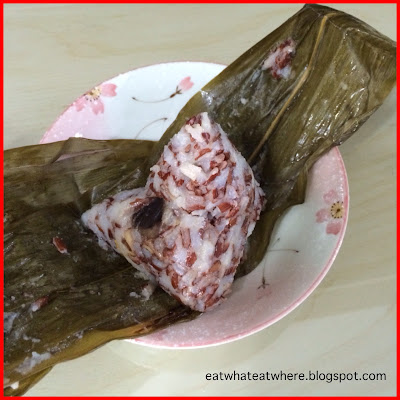 Visually, it looks lovely with the brown rice interspersed with the white glutinous rice.  But then the rice dumpling tends to fall apart as soon you open up the bamboo leaves and that's because of the lesser amount of sticky rice used to hold it together. 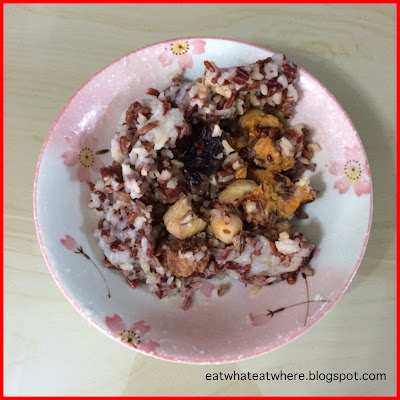 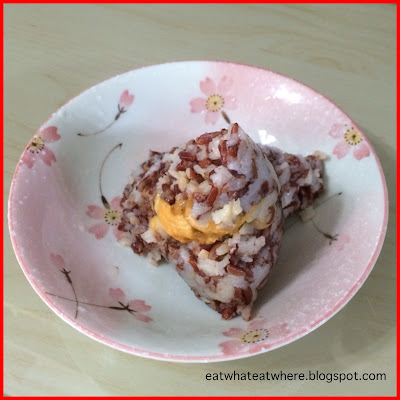 Taste-wise, it's edible but let's not kid ourselves...it's never going to be as delicious as one with 100% sticky rice (that's why I've never attempted to buy one knowing the possible outcome...haha!).  Eat this only if your health does not permit you to eat glutinous rice! ;P 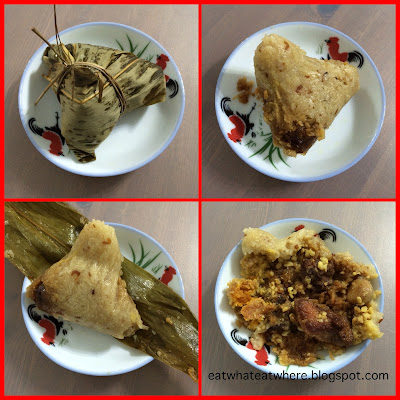 The Cantonese chung still remains firmly my top favourite.  This is a place to get your rice dumplings supply if you don't mind the higher prices.  Actually, the prices aren't very far off as the Cantonese chung I get from O & S Restaurant in PJ costs RM6.50 already in 2019.

Taste-wise, they nailed the overall flavours of the dumpling except for the less-than-stellar quality of the salted egg yolks (the ones from O & S are of a better quality for sure).  The best ones (at their freshest) should be bright orange in colour, slightly oily around the edges of the yolk, not hard when you bite into them and taste absolutely creamy.

So, if the quality of the salted egg yolks or the price of the bak chang isn't an issue for you (and this place is nearer you), then you'll probably be pleased with the flavours of the dumplings here.  Personally, if I don't happen to be in the PJ vicinity or don't wish to travel all the way to PJ just for the bak chang, then the ones here will be an option for me, otherwise the ones from O & S will still be my perennial favourite for its better price and better quality salted egg yolks.

Well, the Dragon Boat Festival, which I would much prefer to call the Rice Dumpling Festival (for obvious reasons), will be upon us soon...so it's a good time as any to indulge in some good chung! ^.^